Please note that we are covering these topics and questions over the next few weeks.  You should be able to answer Questions #1 through 4 now, if not soon.

The transfer of energy from one organism to another
All living things (plants, animals, bacteria, etc.) need energy to live, and all living things get this energy from food.  Food provides energy in the form of chemical energy.  But, we learned that the energy stored in food has to be converted to a form of energy that organisms use to live.  It must be changed into usable energy by the organism using a process called respiration. The energy is used by the organism to carry out metabolic activity (all the things that cells do to keep you alive).

Food chain: The definition of a food chain is, "the transfer of energy from one organism to another." The arrows point to the organism that receives the energy. These arrows are called strands.

Trophic level:  The highest position an organism occupies on a food chain.

Decomposers:  Decomposers are Nature's recyclers! They are a special group of organisms that obtain their food by consuming dead or decaying organisms and break them down into smaller molecules called "nutrients." Some of these nutrients enter the soil and are dissolved in water where they can be taken up by plants through their roots or by fungi through their root-like mycelium. Decomposers can be fungi, bacteria, insects and small animals such as crabs.
Organisms that eat....
All organisms that eat are consumers, but not all consumers eat because they do not have special adaptations (such as mouths, teeth, beaks, proboscis etc.) to eat with.  "Vore" means "to eat." We use special terms for organisms that eat. Fungi and many bacteria are consumers but they absorb their food without mouths

Herbivores:  Organisms that eat plants are not only called primary consumers.  They are also called herbivores (herb = plant, vore = to eat) Cows and deer are herbivores, as are many insects.

Carnivores: Carnivores are a type of consumer that eats meat (carne = meat, vore = to eat). Owls are carnivores because they eat rodents and birds.  Some insects are carnivores. If a carnivore eats an herbivore, it is also called a secondary consumer.  Depending on what organism it eats, a carnivore may also be a secondary, tertiary, quaternary (and so on) consumer.   If you look at the food chain illustration above, you'll see that owls and shrews are both carnivores.  Because the owl eats the shrew, this is an example of a tertiary consumer eating a secondary consumer.

Omnivores:    Organisms that eat both producers and consumers are called omnivores. People are omnivores, and so are rats, racoons, chickens & skunks. So... is an omnivore a primary, secondary or tertiary consumer?  Well, it depends on what it's eating..  If it's eating grass, it is a primary consumer.  But when it's eating a rabbit, it's a secondary consumer.  And when it eats a salmon (that eats insects and crustaceans), it's a tertiary or even quaternary consumer. But, we rank them at their highest level of consumption.  So a deer will always be a primary consumer, and an owl can be as high as a 5th level consumer.

Detritivores:  are a special kind of decomposer that eats dead or decaying organisms.  Detritivores (detrit = wear down into bits, vore = to eat; have mouths and eat dead bits of plants and animals. All detritivores are decomposers because they both consume dead organisms.  But not all decomposers are detritivores.  Some examples include worms, crabs and certain insects (pill bugs, millipedes).

Remember: Each consumer in the food chain gets their energy in the form of food by consuming another organism - except producers, who make their own food.
When you draw a food chain, you then always begin with a producer. Without the producers, there would be no food to pass on to the consumers.   Don't forget, the arrows should point to the organism doing the consuming because the energy is transferred into that organism.  See the picture above  for an example. 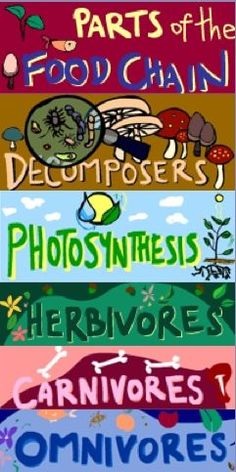 Click on this image for another explanation of food chains. Then go to the "Decomposer" game on the same website and see if you can identify the decomposers. Please note that this website says that decomposers "eat." This is not necessarily true, as mentioned in our definitions. 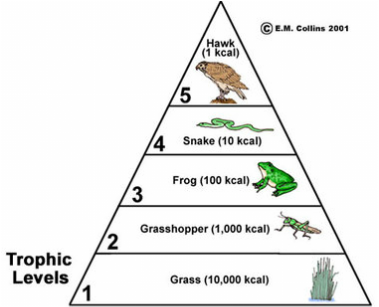 2. As you go up the trophic pyramid, the total number of organisms (or biomass) at the next level decreases because much of the original energy captured from the sun during photosynthesis is lost at each level of the trophic pyramid (see explanation below). Consumers at the highest trophic level are called apex predators.

3. The trophic pyramid shows that some, but not all, the original food energy made by photosynthesizers is transferred from one trophic level to the next.

a. Organisms use food to obtain nutrients, grow and have energy for metabolic activity.  Metabolic activity is all the things your cells do to keep you alive.
b. MOST (90%) of the food an organism makes (in the case of a producer) or consumes (in the case of a consumer) is changed back into energy for metabolic activity through the process called "respiration."  The remaining 10% of the food is used to grow (or make biomass), SO the next organism that consumes it only receives 10% of the original energy. This is called the "10% rule."

For example, calories is a measure of food energy.   A plant might make 10,000 calories of its own food by photosynthesis.  It will use 9,000 (90% of 10,000 calories) calories to live and 1,000 to grow.  When an grasshopper eats that plant, it will only get 1,000 of the original calories that the plant made.  That grasshopper will use 900 of those 1,000 calories for its own metabolism; and 100 of those calories become part of the grasshopper (its biomass). If a frog eats that grasshopper, it will receive only 100 of the original calories produced by the plant, 90 of which the frog will use to live and 10 that will become part of the frog. So, as you go up the trophic pyramid, you'll see that you need a LOT of plants to provide energy to all the other organisms up the trophic pyramid.

The role of decomposers and apex predators in an ecosystem

*  Did you ever wonder what the 4th level is called?   Quaternary!!  What about the levels after that????
5th: quinary
6th: senary
7th: septenary
8th: octonary
9th: nonary
10th: denary